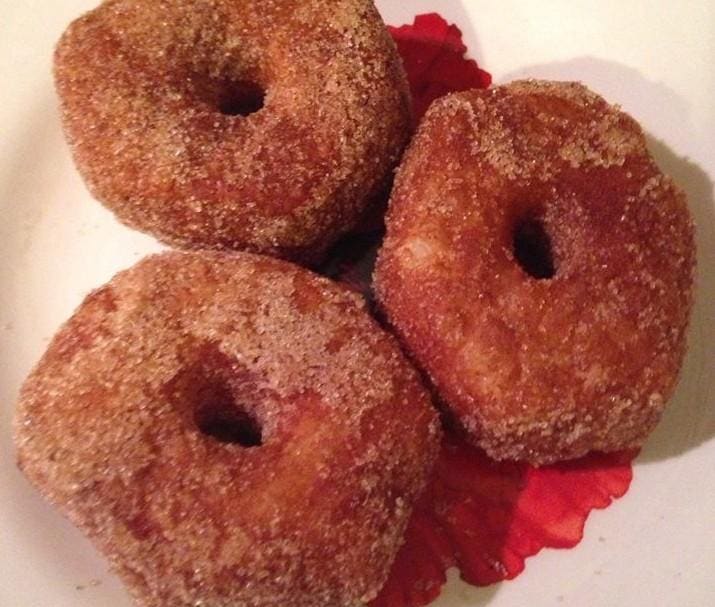 Coffee and doughnuts used to be an inexpensive start to the day. But as coffee has gone upscale, doughnuts have followed.

Every major city in the country, and many smaller ones, now boast upscale doughnut shops, with exotic toppings and prices to match.

While hipsters once had to hunt for them, and still happily wait in line outside places like Boston’s Blackbird Doughnuts, now savvy shops like Chicago’s Glazed and Infused are right inside hotels where tourists can easily partake.

You can easily spend $30 or more on a dozen of these fashionable doughnuts. And you can expect they’ll be topped with everything from fresh fruits to single-note chocolate to bacon.

In fact, the country’s most famous upscale doughnut shop, Voodoo Doughnuts in Portland, Oregon, shot to fame for its maple bacon bar doughnut. And, similar flavors are in vogue across the country.

Ronald LaPorte, co-owner of Blue Dot Donuts in New Orleans, tells me that his maple bacon long john with chopped bacon on top is the most popular thing in his Mid-City shop.

“We were the first store to bring to the local area and now every shop has it,” LaPorte said in an email.

Among the other popular doughnuts at the shop, “our apple fritter is crazy good and huge,” he says. But “pineapple iced donuts did not go over too well and only lasted for a few weeks.”

The secret to success for these modern doughnut shops is to be creative. “We are willing to try anything on a donut,” LaPorte says. “We once entered a local festival and smoked some pork butts and put it inside of  our unglazed éclair style bun.  We added an Asian slaw and won the best meat category.”

Upscale doughnuts are appealing to food entrepreneurs because the cost of entry is fairly low. Blue Dot was founded by three former New Orleans police officers who were passionate about coffee and doughnuts.

New Orleans, of course, is better known for beignets — deep-fried choux pastry generously topped with powdered sugar. But, they’re not really a portable item, and need to be eaten hot with plenty of napkins.

“There were not may too many donut shops around, and we wanted to do something different than just a glazed donut,” he says.

LaPorte already owned Blue Dot’s original building when the trio decided to jump into the doughnut business in 2011 (they added a second location in the Uptown neighborhood in 2014).

The building was vacant, “and I negotiated a good rent on it,” he joked.

There was no formal business plan, and they did not purchase doughnut machines, instead deciding to cut their doughnuts by hand. But they installed a convection oven to bake muffins and other treats. The cops watched videos on YouTube to school themselves, LaPorte says.

Their police background helped the trio get publicity, and land them on food television shows.  They’ve also relied heavily on the Web to get the word out.

“Social media is everything today.  We have Twitter, Facebook, Instagram, Yelp and a couple of others,” LaPorte says. “I reply to all of the feedback, good and bad.”

I tried Blue Dot doughnuts not long after the original shop opened, thanks to a Groupon, and their product was easily as good as any other big city doughnut I’ve tasted.

Blue Dot makes 50 varieties daily, with seasonal flavors and some that rotate in and out. Buttermilk doughnuts have real buttermilk, there are doughnuts with sweet potato filling and King Cake doughnuts during Mardi Gras.

Most days, the company sells 100 dozen doughnuts, and more on weekends, LaPorte says. He recently instituted a small price increase to $9.19 a dozen, a bargain in the fancy doughnut world.

And, there are still some old-fashioned shops like Sweetwater’s Donut Mill in Kalamazoo and Battle Creek, Mich., where prices are still on the affordable side.

However, many doughnut places have begun adding other menu items, perhaps preparing for a day when doughnuts fade in popularity. Blue Dot, however, has a different strategy.

One of its special markets is weddings. Says LaPorte: “Couples like to have a doughnut tower in lieu of a cake, or just extra donuts for their guests.”